We are Open!  Important information about traveling to HawaiiLEARN MORE

We are Open!  Important information about traveling to HawaiiLEARN MORE

A brief guide to O’ahu hikes.

For me, it’s the first deep breath when the ironwood trees start. Freshly filtered through pine needles, the air restores me as it fills my lungs. In that moment, I forget my bills, my bad ankle, the coffee I burned that morning, and instead find myself forgiving the invasive ironwoods’ tendency to snuff out biodiversity on island ridges. I’m alright; the world’s alright.

Every hiker seeks something like this, a high that goes beyond the altitude gained through climbing. For many, it’s an itch to escape the city; for others, it’s a summit’s commanding vantage; and for some, it’s purging toxins through sweat.

Most of Hawai‘i’s trails were first trod by Native Hawaiians seeking things, too. When kanaka maoli hunted deep into valleys for pigs and rare birds, collected water from mountain springs, warred along cliffs, and ascended to sacred peaks, they wove through nature on well-worn paths. In 1866, a reporter named Samuel Clemens found such a trail when he visited Kona on Hawai‘i Island—a trip that inspired the works that would cement his literary identity as Mark Twain. 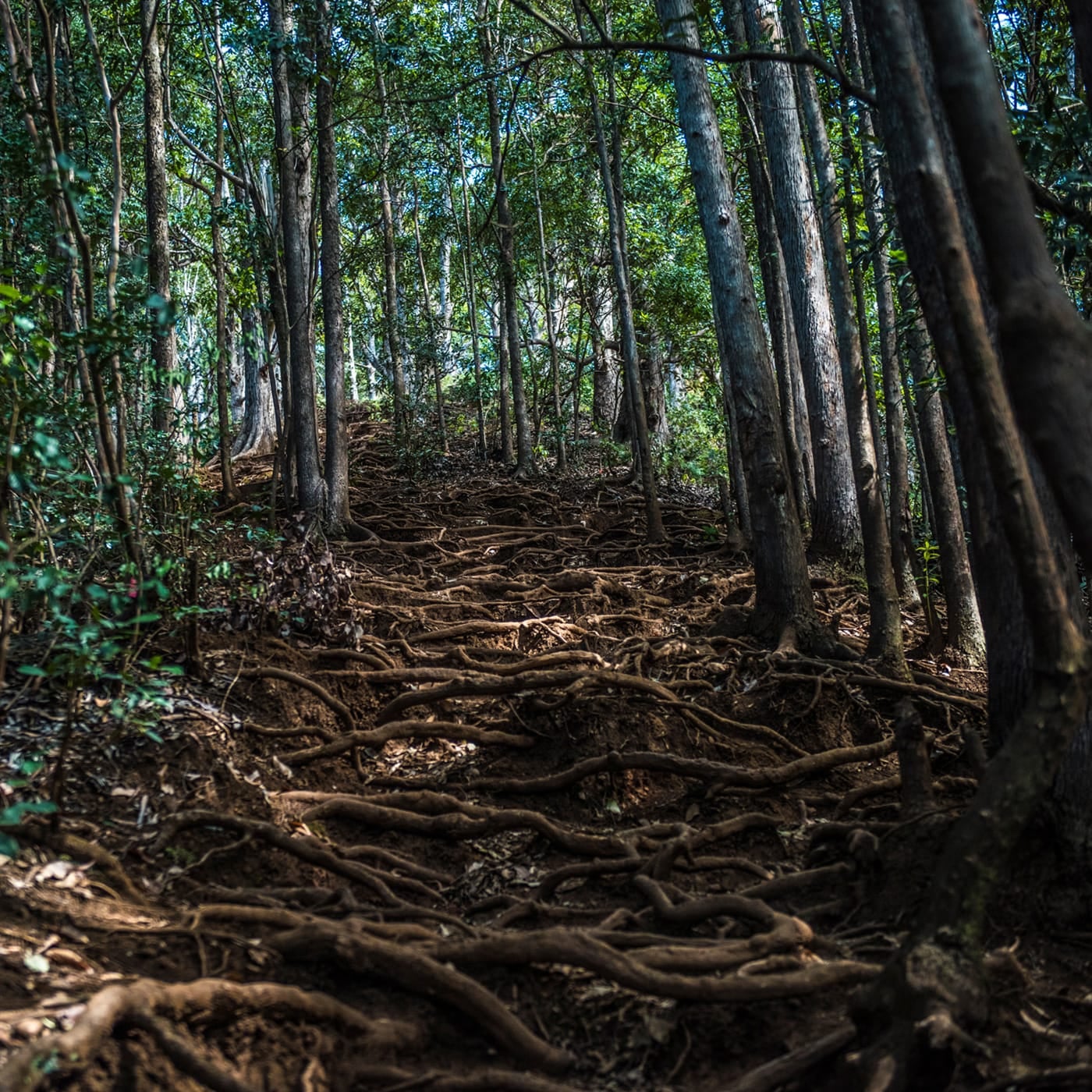 Traversing the lower flanks of Mauna Loa on horseback, the author penned a description befitting many a Hawai‘i hike: “The trail passes along on high ground … and usually about a mile distant from the ocean, which is always in sight, save that occasionally you find yourself buried in the forest in the midst of a rank tropical vegetation and a dense growth of trees, whose great bows overarch the road and shut out sun and sea and everything, and leave you in a dim, shady tunnel, haunted with invisible singing birds and fragrant with the odor of flowers.”

It’s not often that Twain’s biting humor goes slack-jawed, but maybe this was his sought-after thing, his itch: a space that could blunt his cutting wit. Although exoticist passages like these inspired waves of visitors to head for Hawai‘i’s hills, too, the mountains have remained relatively preserved.

What follows is a brief introduction to a range of state-sanctioned hikes on the island of O‘ahu. While finding your maximum elevation, malama ka ‘aina—“care for the land”—to help keep it intact for the next generation.

Farrington Highway leads to O‘ahu’s westernmost tip from both the west and north, terminating on either side of Ka‘ena Point State Park just a few miles from the furthest point. Where they end, flat trails pick up the route. These hikes are long (six or seven miles round-trip) and sometimes muddy walks that parallel the ocean, with plenty to see along the way. The area is known for its protected albatross nesting areas, and the endangered monk seals and green sea turtles that often come ashore. Look back from the tip to see the island’s north and west sides at the same time. Hawaiians believed the place was a jumping-off point where souls left one world for the next, following the setting sun. If you plan to stay for the spectacular sunset, be sure to pack a flashlight.

On the northern drive to Ka‘ena Point, behind Dillingham Airfield, lies the switchback-heavy Kealia Trail. A true bun-burner, Kealia is less about the destination than the journey (just under three miles round-trip). As you zig-zag up the hillside, you’ll see the North Shore unfold and the ocean stretch out before you. Keep a lookout for splashing humpback whales in winter months. There’s a covered picnic table at the top where you can snack and rest your glutes.

If you’re closer to Honolulu and want a hike with a bit of fight in it, Kuli‘ou‘ou Ridge Trail is for you. Though it’s somewhat steep at times, and, of course, muddy (embrace it already!), this 4.5-mile round-trip trek is one of the shortest of any routes to reach a Ko‘olau mountain range summit. Due to its proximity to the city, the trail can get busy—but it’s always been: Hawaiian bones found in area caves date back about a thousand years. 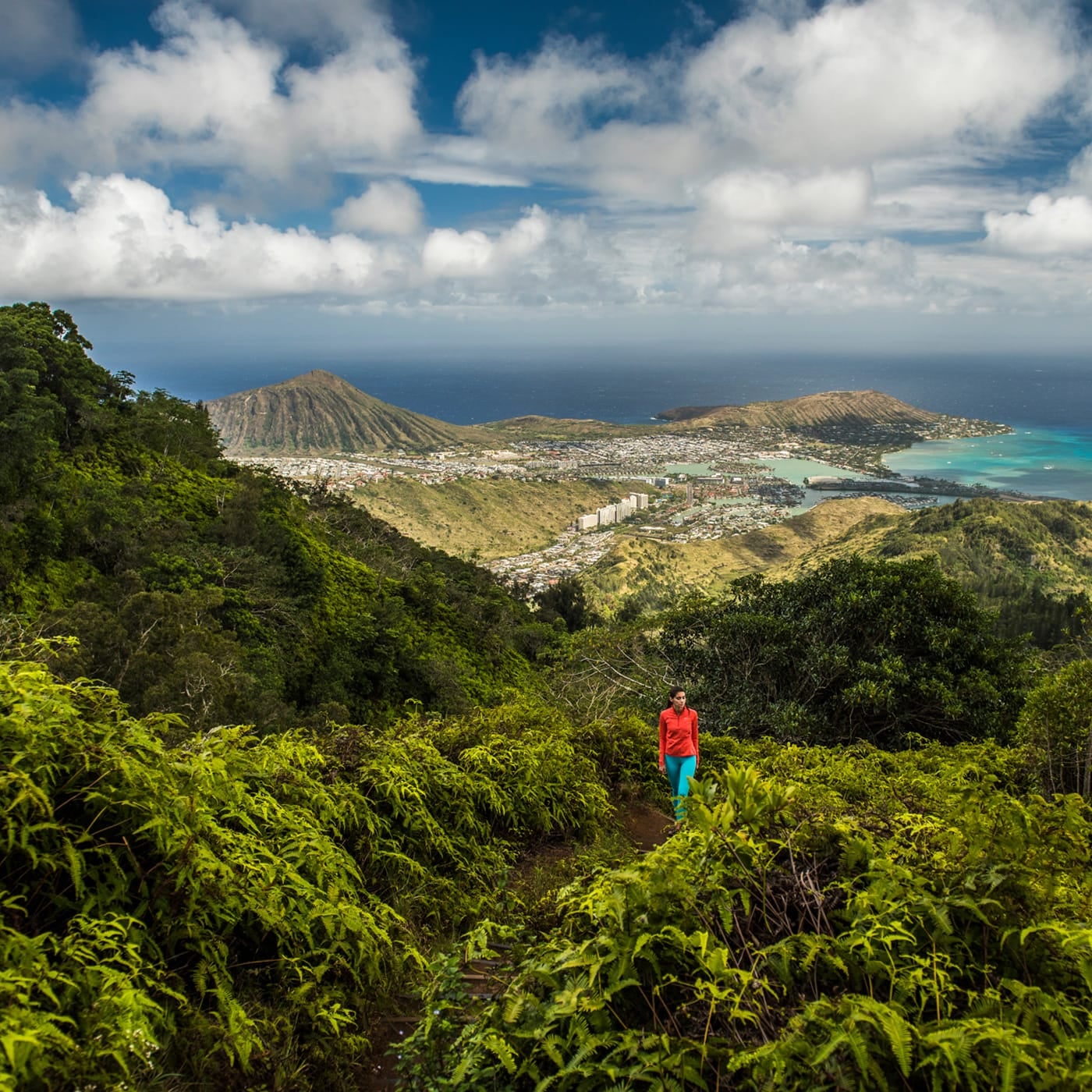 Don’t be surprised if the lyrics of “Welcome to the Jungle” start playing in your head as you wind along this loop trail that takes you deep into Kahana Valley on the island’s east side. Lined with ferns, pandanus, ti, guava, bamboo, ‘ohi‘a, and, of course, the trail’s namesake koa trees, this 2.5-mile, mostly flat trek is easily one of the lushest you’ll find on island. There are even swimming holes tucked in the back of the valley—the perfect way to cool down and wash off the mud.

For some, hiking is about conquering, and nothing short of the highest peak will do. These types will relish the trail to O‘ahu’s 4,025-foot-high roof, Mount Ka‘ala. Starting deep in the remote Wai‘anae Valley, the seven-mile round-trip hike covers terrain as physically arduous as it is biologically diverse. Among its fauna are several rare native species, including tree snails found only on O‘ahu, and happy-face spiders that few ever glimpse. Those who reach the large, spherical radar building at the trail’s summit will certainly feel a sense of accomplishment, but may find that feeling tempered by the dense clouds that can shut out the views. Take your time to savor the final stretch, which follows a creaky wooden catwalk through one of O‘ahu’s last endemic shrub forests.

Starting from a residential area in central O‘ahu known as Pacific Palisades, this mixed-terrain, moderate hike, shown above (three miles round-trip), is one of the quicker ways to see waterfalls and enjoy freshwater swimming holes. Getting it on a day with optimal conditions requires a compromise: Waimano Falls needs a lot of rain to really gush, and that means mud. For advanced hikers, there’s a marked offshoot path onto Manana Ridge Trail that takes a seven-mile (each way) ridgeline all the way to the summit of the Ko‘olau Range, from which you can see unparalleled views of Kaneohe Bay. 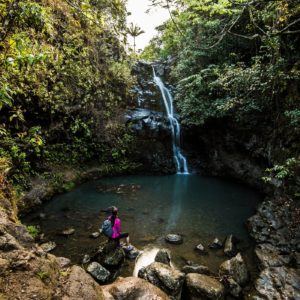 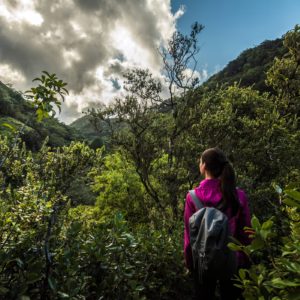 For more, see Dip at ‘Alohilani.